It’s about time i started checking things off my bucket list.

Number one on the list: Sleep under the stars in the Sahara Desert.

I finally managed to make this one happen when i took a trip to Morocco. For some reason, i had this idea that getting to the Sahara would be extremely expensive and difficult, but it was actually very easy to plan. First off, research, research, research. i looked at several different tour companies around Morocco that offered excursions into the dessert along with legitimate reviews before i finally decided on one.

I decided to go with Camel Trekking after reading numerous positive reviews about them and speaking directly with the tour operator. Although he got obviously annoyed by the amount of questions that i was asking him, he was the most helpful and responded to all of my emails very quickly.

The Desert trip was one of the first things that we had on our list for our trip to Morocco. We packed up all of our camping things after a day of shopping in Gueliz, and left the rest of our luggage in our Riad as we headed out the door at 6am. Our driver Said (Pronounced “Sigh-eeeed”) picked us up in a small SUV. i was a bit surprised to see that it would just be my boyfriend and i on the trip, as i assumed it would be a group thing.

This made for a slightly awkward first couple of hours in the car. I was extremely nervous just about having to be in the car for 10+ hours, and i didn’t know how it would be with some strange man sitting in the front seat. Although we were all silent at the start, we were best friends by the end of it.

We had numerous stops along the way to the Sahara as we ventured through the High Atlas Mountains. I had no idea that we were doing this beforehand, so i was shocked and amazed for 90% of the journey.

There were legit people living on these massive mountains. They were walking along the sides of them like the height was no big deal. There were clay villages everywhere along every mountain that i saw. No electricity, nothing. Seeing that people still live this way was definitely an eye-opening experience.

We wound up stopping 10+ times on the way to the dessert to eat, take photos of the mountains, the villages, and other instagram-worthy spots. I was fine with the extremely long car ride simply because the views were so amazing.

Eventually, the scenery finally began to change from mountainous to massive sand dunes, and i knew that we were getting close. Not to mention the fact that we all started to sweat profusely from the Desert heat.

We finally pulled up to a small hotel that was literally in the middle of nowhere. From here, we joined another group and chose the camels that we wanted to ride through the desert to our campsite. I chose a nice-looking camel that actually wound up being not so nice (he liked to bite), it was more like a bull ride than a camel ride, but that’s okay.

We rode our camels for about an hour and a half before arriving at our campsite.

We got to choose between 5-6 different tent options. Since there weren’t too many people in our group, Sam and i got our own tent. I was surprised to see that they were extremely nice and well-kept on the inside given the conditions. There was even an in-suite bathroom and shower.

We took a little bit of time to rest, but since it was later in the day, we didn’t want to miss the sunset. We all took off and ran up the nearest sand dune that we could find, and took a seat at the top.

Needless to say, we didn’t talk much. There’s just something about being so far away from home, on another continent completely, in the middle of nowhere watching the sunset that makes you speechless.

After sunset, our hosts (Nomads) made us dinner in the main tent. we all sat together and ate, and then headed over to a bonfire.

I was not even aware that a bonfire was going to be part of the experience, but i’m glad that it was. They played traditional songs for us and asked questions about America, the Netherlands, and Germany (where our group was from). I wound up getting into a deep conversation about astronomy and life with one of them (a conversation that i will never forget) for a few hours before heading back to the tent.

All in all, it was an amazing experience. My one and only disappointment was the fact that it was slightly foggy at night, and i didn’t get to see that iconic view of the stars that you don’t get anywhere else but the Sahara. Oh well, all the more reason to go back and do it all over again right? Time to go check more things off my bucket list. 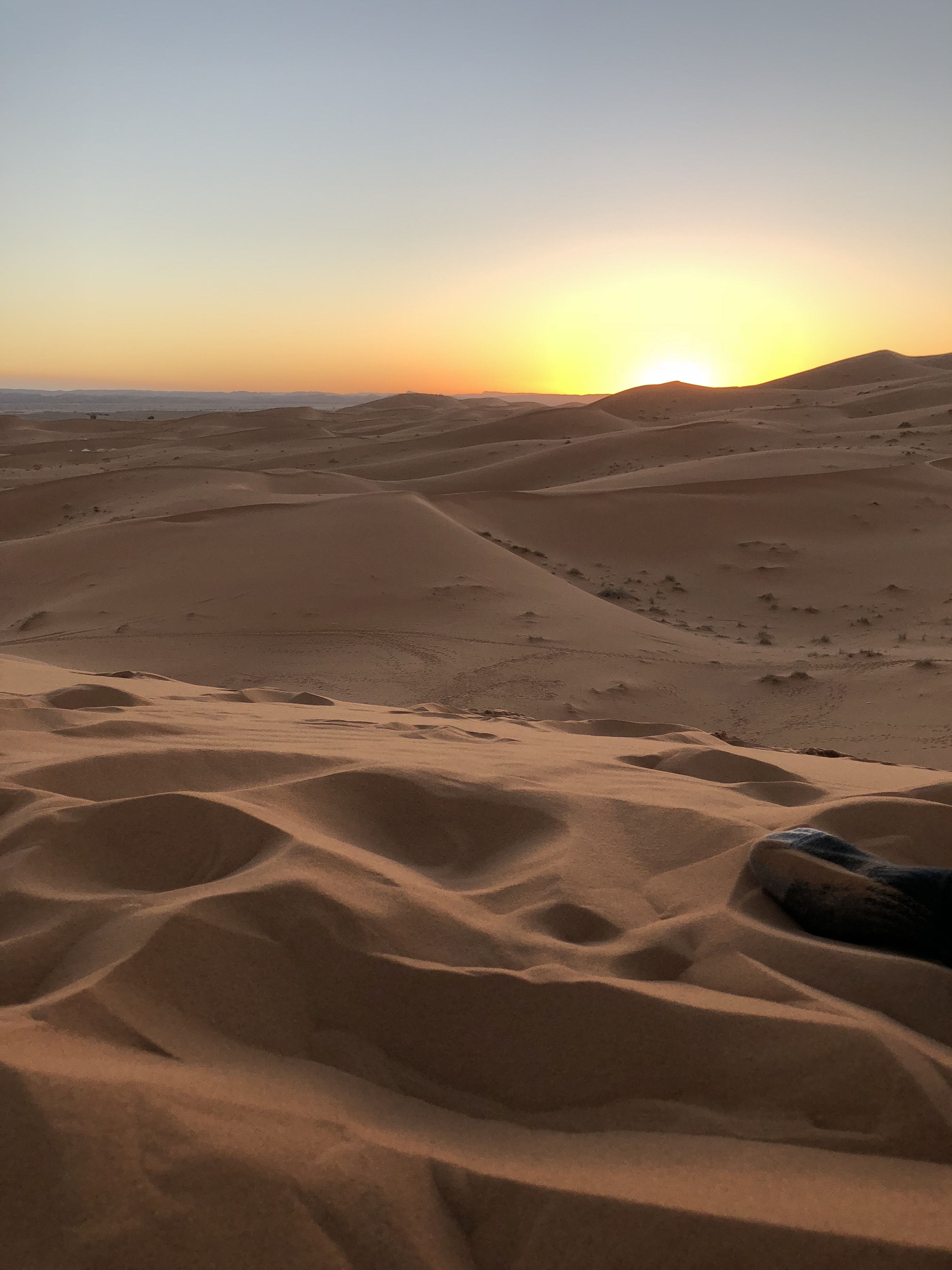 Welcome! I'm Sydnie. I'm a West Coast based blogger wannabe. I created this blog to store all of my travel memories and to use as a creative outlet. I'm a digital marketer by day and a reader/writer/travel planner/health and fitness enthusiast by night. You will find a mix of all of these topics on my blog. Enjoy xx